I originally posted this as a tweetstorm on 5/27/2014. At the time interest in driverless cars was a bit esoteric and few were examining the implications of their rise beyond simply making commutes easier. There's of course much more work to do in driverless tech, and driverless cars will not be a transporation panacea, but I'm still extremely excited for the future of transportation and the ways our cities and living condtions will be reshaped by this technology.

Getting from Point A to Point B has always been a big deal for humans throughout history. Days, weeks, months, sometimes years of travel.

Roads take up a huge amount of space. For every square foot of road, its probably 90+% unoccupied at any given time. 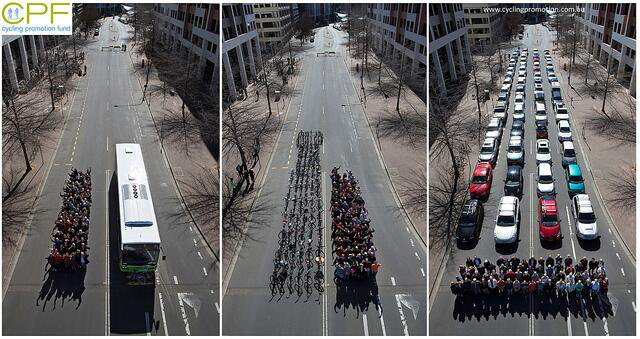 Roads are also quite costly to maintain and prevent cities from having greater population density and greater shared spaces like parks. The reason we have so many square feet of underutilized roads is simple - we're bad drivers, and we operate individually rather than systematically.

Public transport is a good alternative to cars, but has its own issues - big upfront & ongoing costs, doesn't do 'last mile', slow, dirty etc.

The environmental cost of people driving is also big: 17.3% of greenhouse gases come from cars and light-duty trucks. In many cases just some changes to driving habits can result in 20-30% better fuel economy.

Those are gains for people acting independently. If we acted systematically, we could access a huge set of additional gains. Lights could respond to demand so cars wouldn't need to stop, cars could draft to reduce overall net drag (a huge source of fuel consumption). Wheel width could be narrowed to decrease rolling friction... list goes on.

Lets not forget the 30,000+ people who die each year in auto accidents - mostly youth. We're at the point where as long as people are behind the wheel, we're doing it wrong. Driving is an outdated, labor- and cost-intensive affair.

Transportation is fundamentally a service, not a product. Car companies will need to become service companies or they will perish.

From a cognitive perspective, we will be able to go from Point A to Point B using basically zero attention. Never possible before. Cars of course won't even look like cars. What if your 'car' was your breakfast table or vanity? Seriously. Brush teeth + eat going to work.

Of course, with cars operating systematically, utilization could increase. One-lane roads only. 75% of city roads unnecessary. rip em up!
Did you know? Cities with higher density cores improves growth, talent, and diversity.

Another great thing about driverless cars is that we don't need to park them. Can have roving fleets. Press a button and one arrives. This means we don't need to dedicate HUGE swaths of valuable land to parking lots, garages, etc. With no parking lots and 75% less road space, you're looking at a huge amount of space opening up in every major city. Take a look at some city maps by surface parking & road space. 25%+ of the space in a city is streets, in the US it can be 60%+.

Driverless cars present a dilemma for anyone planning large scale mass transit these days. Case in point is California's high speed rail. Planners think about whats possible today, but amortize over decades based on ridership assumptions. California high speed rail is a boondoggle because of this.[2]

High speed rail projects like California's, or like Germany's Munich-Berlin, face challenges going thru localities. So they add more stops. For instance, the Munich-Berlin line will still take 4hrs to get there. Too many stops.

When you add up the time to get to and from stations AND rail time, point A to point B is 5+hrs Munich-Beriln. For LA to San Francisco, 4+hrs. The ability to get from point A to point B directly without stopping means driverless cars will be the end of rail for people transport.

Right now, we have 3 ways to get places: cars for not far away, rail for kinda far away, and planes for far away. See who's getting the squeeze.[3]

Driverless cars tho mean that we can manage risk better over long distances - w/ dedicated HOV-like lanes, bump up speed and draft with others. A 6 hour San Francisco to LA trip at 65mph average speed becomes a 4 hour trip @ 100mph average speed. Suddenly, high speed rail at 3.5 hours + 1 hour combined to/from is not so high speed.

I'm a huge train buff, by the way - Germany's ICE is my favorite. But HSR is not economical in age of the driverless car.

What about busses? Ask yourself: why are they so big? To maximize the of passengers per bus driver, because labor costs are expensive. What percent of the time is a bus actually moving vs pickup /dropoff? I'm guessing like 50%. Very inefficient for riders.

A bus in the driverless car future is just a driverless car.[4] That's it. No big clunky slow vehicle that gets in everyone's way.

Busses are the most economical form of transport currently - hugely important to have transport costs low for the working class. So what might a city do to help provide for those that need transport but cant afford? Just subsidize it from the driverless fleets.[5] Its actually remarkably easy accounting, AND it'll have an audit trail. If you want a peek at this today just look at your Lyft/Uber receipt.

When I talk to people about driverless cars, I liken it to dominoes falling. There are LOTS of dominoes in this tech. Driverless cars upend buses, rail, taxis, car companies, and trucking. And that's just the implications of stuff with wheels.

One other implication of driverless cars is housing. Where are you going to live when traffic improves & driving is not attention-consuming? With more density and less wasted space on roads and parking, there's more room to live in the city around others (to be scenius as Brian Eno calls it), but its also easier to live in more rural environments.

Driverless cars mean you won't have to be stuck living in boring suburbs anymore. This is a huge shift from the 20th century model of where we live/work. I'm personally looking forward to having my own little plot of land where I can grow food & get off the grid. Wouldn't that be nice?

Things like driverless cars are amazing because they take these constraints we've lived with for generations, and just dissolve them. Anyway, that's all for tonight. Safe (automated) travels everyone.