Rumor has it Apple will launch a new 10.5" iPad Pro sometime soon(ish). This model is rumored to do away with some bezels and the home button, getting the larger screen size with the same physical form factor as the 9.7" iPad Pro.

As a current user of the 9.7" iPad Pro, that’s really exciting news. One of the biggest issues I have with it is the 9.7" screen size is just a bit too small for both pencil input and multitasking. And of course, bezels just scream compromise.

However, the reason I’m writing this short article is to clear up some confusion about what resolution this screen could have, and in doing so discuss briefly the rationale for resolutions in iOS devices in general.

A little while back an article popped up showing a neat trick of size comparison when considering the resolution for the new 10.5" iPad Pro:

This article got a bit of traction and I didn’t see anyone question it closely. John Gruber recently referenced it again in his piece on the 10.5" iPad Pro.

I’m not particularly convinced, because it doesn’t fit the rationale for why Apple selects certain resolutions for iOS devices. Three reasons:

It’s a waste of pixels

Year over year, Apple’s GPUs tend to gain a good amount of speed, but that is a lot of ground to make up. The GPU to drive that will likely consume more energy, requiring a larger battery, and requiring larger chassis to dissipate the heat, and will cost more both because the SoC can no longer be binned to improve yields [1] as well as the screen being more expensive to manufacture.

Apple could dial back the GPU speed for the 10.5" to better fit these constraints. But then the performance between the two models wouldn’t be aligned, which could be a headache for developers. Currently, the 9.7" and 12.9" perform at roughly the same per-pixel speed (due to the 12.9’s beefier GPU), why mess with that?

So, your new iPad Pro will cost more, be thicker, weigh more, and take longer to charge. But surely there’s an upside?

Unfortunately, this resolution also implies smaller touch targets on a device that doesn’t need them. Apple’s Human Interface Guidelines specify a minimum touch size of 44x44pts, due to the accuracy limitations of fingers. On the iPad Pro models at 264ppi, these are 0.33sq inches. On the iPhone and iPad Mini at 326ppi, they’re 0.27sq inches.

This makes sense because of how these devices are held — you hold smaller devices closer to you, where you can exert more fine hand dexterity. The farther away the device is, the less dextrous you can be when controlling it [2].

This is much like the definition of ‘retina’ that Apple uses — ‘retina’ is not a fixed ppi, but varies based on the optimal distance the user is away from the screen in each device class. The farther they are away, the less dense the pixels are, because there’s no point rendering pixels the user cannot perceive.

Yes, the Pencil offers some potential for reducing touch targets in order to increase interaction density, but that’s weighing an optional accessory’s usability above the device’s, which doesn’t make too much sense. Interaction density is a problem that needs more solutions though.

While it is plausible the new iPad Pro would go to 326ppi, I think this would make the experience worse. Anyone who’s used an iPad for a while has had many experiences trying to tap on things in the course of normal usage and not getting what they wanted. Why make that worse? And to argue to the extreme, it’d be silly for the 12.9” iPad Pro to have smaller touch targets, because you’d have to lift the monster even closer to you to get what you wanted. No thanks.

It’s not even a software thing

While this 326ppi thing is a nice trick of the math, it also ignores the work that Apple has done the past several years building out resolution-independent software libraries in iOS. Apple has been preparing for this future for a long time. We’ve moved beyond the era where exact pixels matter — just looking at how iPhones downsample pixels [3]. The only companies that really get excited about pixel numbers are competing on specs rather than utility [4]. 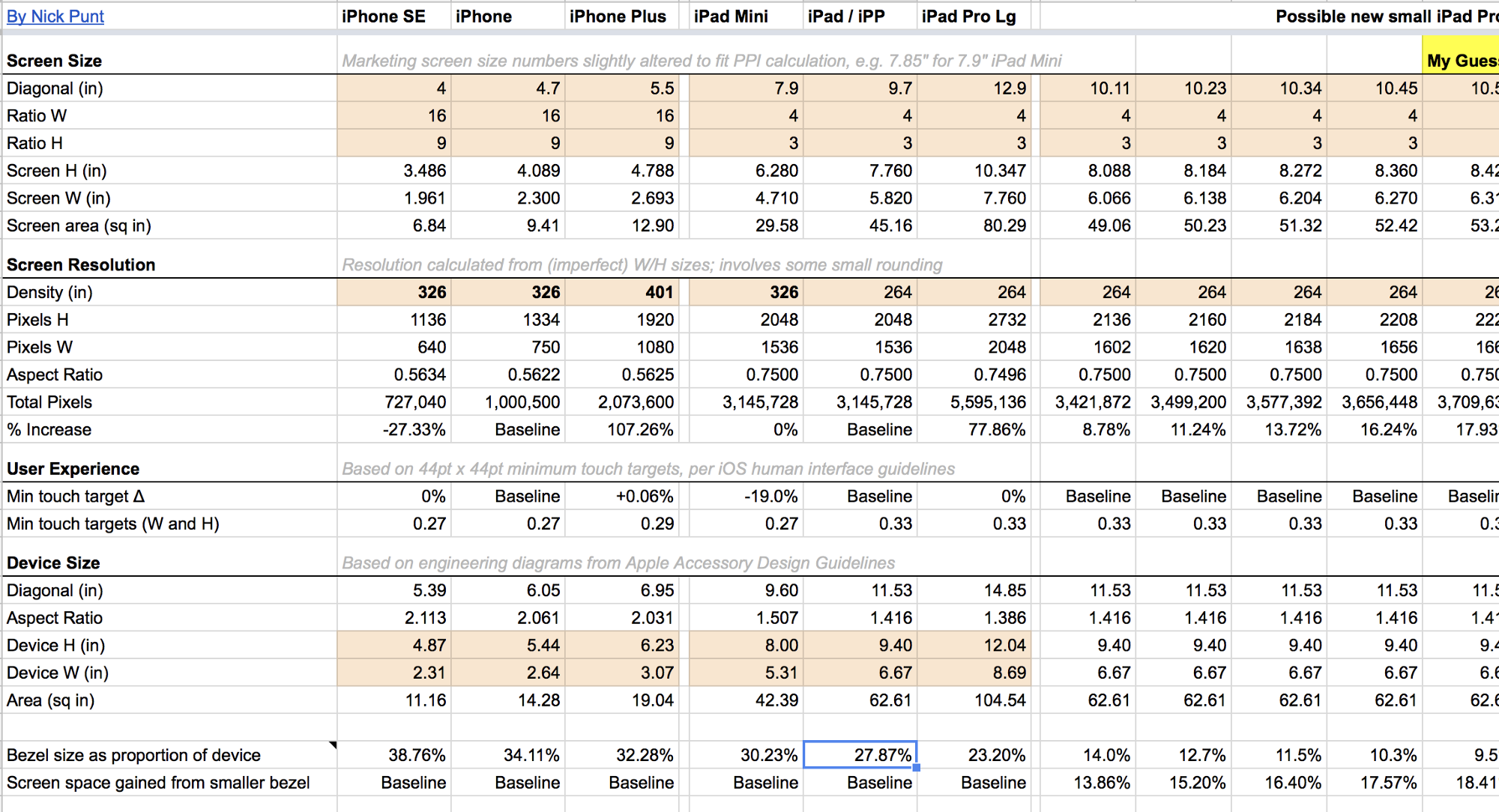 I hope by now I’ve convinced you that it’s unlikely a 10.5" iPad Pro would adopt a 326ppi density.

If you’re interested in poking around some different resoultions and sizes that a future iPad could adopt, I’ve created a spreadsheet that calculates size, resolutions, and touch targets with a variety of different possible sizes [5]. Play around with the numbers in the spreadsheet to make whatever device you can dream up.

My guess is a hypothetical 10.5" iPad Pro will have a resolution of 2224x1668 or 2208x1656. Some time after creating this spreadsheet, a rumor came out suggesting the former resolution (and I kicked myself for not writing this article earlier). If the new iPad has the same chassis size, this would mean that the bezel would only be approximately 10% of the overall device, instead of 27%, and would do away with the awkward home button that never really fit the iPad in the first place.

We still don’t know when this new iPad Pro might drop, but it’s exciting to think about. I really like the market segmentation of a low-end 9.7" iPad (which I hope they return to calling ‘iPad’), and the 10.5" and 12.9" iPad Pros. I’m also quite baffled by the misunderstanding of this segmentation in most publications; I chalk it up to most people simply not understanding the iPad well enough yet. This new segmentation is roughtly the same as the Macbook line, and in fact I think it even fits the iPad market better when you take into consideration high-volume enterprise needs for low cost iPads. You can read my Thoughts on iPad series from 1 year ago for more on the subject of iPad segmentation, feature differentiation, launch cadence, etc. I hope to write a follow up on that soon, as it seems my timing was wrong but my projections may prove accurate.

Other posts in Product